APR vs APY: What’s the Difference? 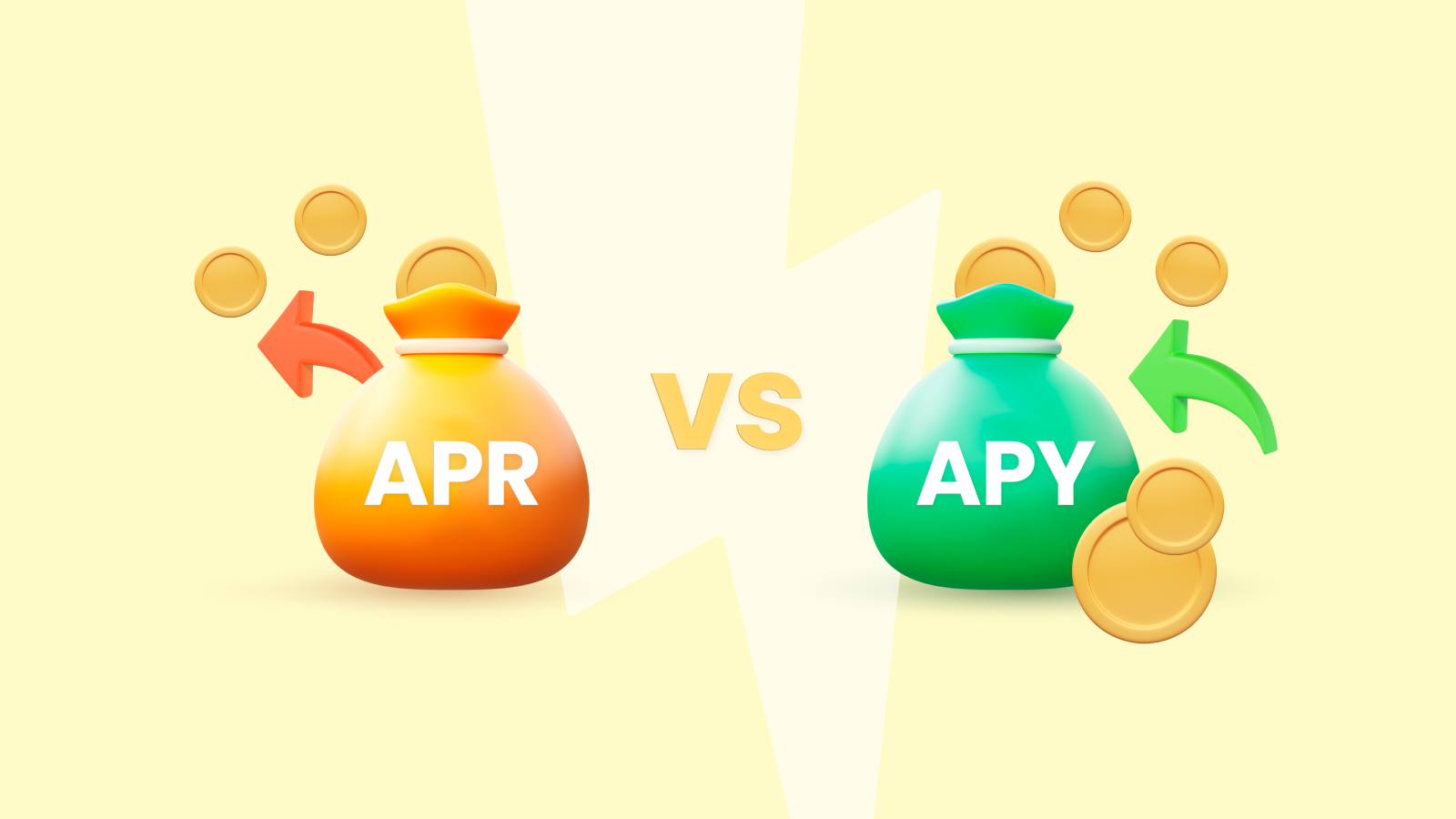 At the moment, cryptocurrencies allow users to earn money not only via risky trading but also with passive types of income. If in the case of investing, users can never guess what percentage of income they will be able to get (and whether they will succeed), then the DeFi sector assumes more understandable and transparent conditions. If you’ve ever been interested in staking, farming, lending, and other passive income tools, you’ve probably come across terms like “APY” and “APR.” Obviously, both of these terms refer to returns, but their essence differs. It is crucial for an investor to understand this difference, so we suggest you clarify the issue.

The interest rate is the percentage the client receives for placing funds on the deposit for a certain period. In this case, we are mostly talking about the annual interest rate. If the deposit duration is more or less than a year, it is necessary to specify the rate for the actual deposit period to calculate the income.

However, the profit of a deposit is estimated not only by the interest rate. The method of interest accrual has a great influence on profitability. Therefore, there is a concept of simple and compound interest in the financial sphere.

In the first case, it is meant that the initial deposit amount is always taken as the basis of calculations during the contract term. Compound interest considers that in each subsequent period, the amount for which the interest is calculated increases by the amount of interest received in the previous period.

APR stands for Annual Percentage Rate, the percentage the user receives for placing funds on the deposit for an annual period. APR is based on simple interest and only considers the interest received on the initial deposit, excluding compounding. In theory, it may sound difficult, so let’s give an example.

For example, you want to join a staking pool that offers an APR of 10%. Let’s say you have deposited $100 USDT. To calculate how much you will receive at the end of the annual period, use a simple formula:

Thus, with the help of APR, depositors can easily calculate what profit they will receive at the end of the annual period. APR is also used in the case of loans and displays how much the borrower will have to repay at the end of the term. However, it should be taken into account that the APR does not include fees that users will be required to pay.

As we have already indicated, APR considers only simple interest and excludes compound interest. In simple words, the profit is calculated based on the initial investment. But in the case of the APY, the situation is completely different.

APY stands for Annual Percentage Yield and is another way to calculate annual profit. In this case, investors use the magic of compound interest and earn more. The bottom line is that the depositor does not wait a year for the profit but reinvests the income received daily/weekly/monthly basis.

Thus, since the deposit is gradually growing, the profit that the depositor receives after the annual period grows simultaneously.

Again, it sounds complicated, so let’s give an example to clarify. Let’s say you want to join the yield farming pool that promises 100% APY. It may seem too much, but these are far from the biggest numbers in the DeFi space. So you decided to deposit 1,000 tokens into a smart contract for one year. In the case of APR, you would have received 2,000 tokens at the end of the annual period, but in the case of APY, your income is calculated differently. You can reinvest the profit received depending on the type of protocol and the accrual periods. Let’s say the protocol pays out a percentage daily. Thus, we divide 100% by 365 and get 0.27% — this is the percentage by which your deposit increases daily. If you reinvest your income every day, you will eventually make a big profit. If in numbers:

Thus, after a year, if you reinvest every day, you will receive $713 more than if compound interest were not considered. As already mentioned, compounding can be done less often. After simple calculations, we get this summary:

Please note that most DeFi protocols display the APY rate to attract more users. In most cases, compounding is done manually by the user. However, there are a number of protocols that provide an automatic solution. In addition, more and more aggregators can do the work for you.

As already mentioned, the reinvestment frequency depends on the protocol’s conditions. If the profit is accrued once a month, you will not be able to compound once a week. In addition, when compounding, the number of fees should also be considered. The fact is that reinvestment is also a separate transaction that requires payment of gas fees. Unfortunately, due to the large associated fees, daily compounding often does not bring the desired profit.

#what is apr vs apy